1 MINUTE MATTERS: IMPROVE YOUR FITNESS WITH THE MURPH CHALLENGE 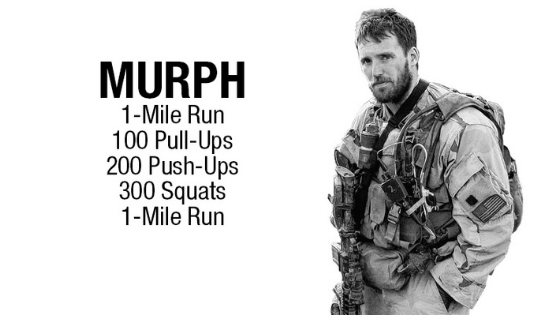 I was extremely fortunate to attend a corporate event featuring an inspiring presentation from retired Navy SEAL, Marcus Luttrell.  You may recognize his name from the movie Lone Survivor, which is based on his bestselling book by the same name.  Lone Survivor tells the true story of Operation Red Wings, a counter-insurgent mission in Kunar province, Afghanistan, involving four members of the United States Navy SEALs with the target to kill a high ranking Taliban leader in 2005.  The mission went awry, and the SEAL team entered into a vicious gun fight with 100’s of Taliban fighters.  Luttrell’s three teammates Michael Murphy, Danny Dietz and Matthew Axelson were killed in the fighting, in addition to 16 American Special Operations Forces soldiers who were killed when their helicopter was shot down while attempting to extract the SEAL Team from the battle.  Luttrell was the only surviving SEAL from the squad; his harrowing escape, protection by local villagers, and extraction by special forces soldiers is a mind-blowing story of courage in the heart of darkness.

While I was vaguely familiar with Luttrell and the Lone Survivor movie, his presentation sparked an inner curiosity to learn more about the Operation Red Wings mission and the men who gave their lives to protect the United States of America.  The next day following his speech I listened to a podcast interview featuring Luttrell’s retelling of the mission, several documentaries, and I watched the movie Lone Survivor, staring Mark Wahlberg.

It’s an interesting experience when realization clicks inside your mind and you understand that something you once knew in part now makes complete sense.  Let me explain.

Several weeks prior, my buddy Brian Hargrove asked if I would join him in a fitness challenge, called “The Murph Challenge.”  I was familiar with the name of this challenge, and I recalled that it originated from CrossFit as one of their top workout events.  I also understood it was developed in honor of a fallen soldier.  However, I did not know who or why.

My research intensified.  Michael Murphy led the SEAL team during Operation Red Wings.  During the intense gun battle against overwhelming odds, he intentionally exposed himself to enemy fire by knowingly leaving his position of cover to get a clear signal in order to communicate with his headquarters. He provided his unit’s location and requested immediate support for his team and then returned to his position to continue fighting until he died from his wounds.  Michael Murphey is a hero, just like every soldier who has given their life for a greater purpose.

Michael Murphy was an avid participant of CrossFit, and after his death one of his favorite workouts was named after him. The workout, which he referred to as ‘Body Armor,’ is now called ‘The Murph Challenge.’

The Murph Challenge is the Official annual fundraiser of the LT. Michael P. Murphy Memorial Scholarship Foundation, presented by Forged.

Since 2014, Forged has raised over $1,250,000+ for the LT. Michael P. Murphy Memorial Scholarship Foundation through The Murph Challenge campaign.

What is “The Murph Challenge?”

While wearing a 20 lbs weighted vest:

Health is one of the 11 focus areas The Pursuit of Growth lifestyle prioritizes regarding active progress towards goals that improve our lives.  Fitness plays a key component in the health journey, and when my buddy Brian challenged me to join him on his conquest to complete “The Murph Challenge” I accepted because I believed he presented me with a new fitness challenge that I had never experienced that would test my limits.  Now, I realize, this challenge is more than just fitness, it’s about honoring service men and women who have given the ultimate sacrifice to ensure I enjoy the freedoms we all experience today.  My drive to complete “The Murph Challenge” has a new meaning and a new reward.

It’s universal knowledge that exercise improves the quality of our lives.  I now have a challenge for you.

Will you dedicate yourself to pursue a new fitness goal to enhance your life?  Will you utilize motivation, planning, processes, sacrifice, and execution to honor those who have given you the freedom you enjoy?  Maybe it’s walking 1 mile every day for a month, signing up for a cardio biking class, joining a yoga group, or grinding in preparation for “The Murph Challenge.”

Do something!  I will.