1 MINUTE MATTERS: THE LEGEND OF SAINT PATRICK AND THREE INTERESTING FACTS ABOUT HIS DAY 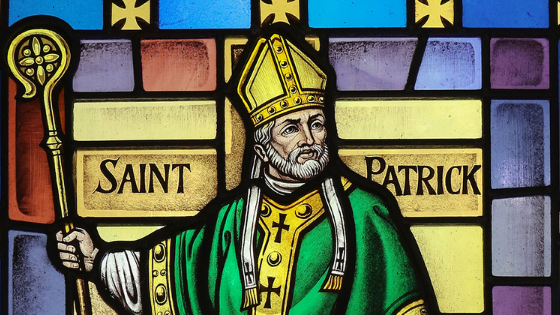 St. Patrick is the patron saint of Ireland and one of Christianity’s most popular figures.  St. Patrick was born in Britain—not Ireland—to rich Christian parents near the end of the fourth century.  He died on March 17th, sometime around 460 A.D., which is why we celebrate St. Patrick’s Day on this date.  He is credited with converting the island of Ireland to Christianity.

As a teenager, Patrick was taken prisoner by a group of Irish raiders who attacked his family’s estate. He was sent to Ireland where he spent six years in captivity and worked as a shepherd.  He turned to his Christian faith for strength to endure his trials. As a result of his intentional commitment to trust God and grow in his faith, he became a devout Christian with a dream of converting the Irish people to Christianity.

According to his writings one night he heard a voice in a dream, which he believed was God, instructing him to flee Ireland.  6 years after his capture, Patrick escaped and walked nearly 200 miles to the Irish coast and then made his way to Britain.

Patrick’s legend states that he experienced a second revelation where an angel visited him in a dream and told him to become a priest and return to Ireland as a missionary.  For the next 15 years he trained in religious studies to prepare for his life’s purpose.

Once Patrick was ordained as a priest, he was sent to Ireland to convert non-believers to the faith.  Patrick chose to incorporate traditional Irish rituals into his lessons of Christianity.  For example, he used bonfires to celebrate Easter since the Irish were used to honoring their pagan gods with fire.

In Irish lore, St. Patrick receives accolades for driving all the snakes out of Ireland.  However, scientists have shared evidence that Ireland has never been home to any snakes. Most scholars believe the “snakes” St. Patrick drove away were likely a metaphor referring to evil people.  St. Patrick’s commitment to righteousness made an impact on the people of Ireland that has lasted the test of time.

St. Patrick’s Day is celebrated on March 17th, the anniversary of his death.  The Irish have observed this day as a religious holiday and feast for over 1,000 years. Eventually, the feast day evolved into a greater celebration including the celebration of St. Patrick, Irish culture, Irish history, and Irish traditions.  In America, St. Patrick’s Day is now associated predominantly with pinching anyone not wearing the color green, shamrocks, and drinking beer.

1. Surprisingly, St. Patrick  would likely get pinched on his special day, as the “official color” of Saint Patrick is a light shade of blue.  The color green became associated with the holiday after it was linked to the Irish independence movement in the late 18th century.

2. According to Irish legend, Patrick used the three-leafed shamrock as a metaphor for teaching the Trinity, the doctrine stating there is one God who eternally exists as three distinct Persons — the Father, Son (Jesus), and Holy Spirit.  Simply stated, God is one in essence and three in person.  In case you are wondering, the chance of finding a four-leafed clover among shamrocks is one in 10,000.

3. St. Patrick’s Day is the fourth largest drinking day of the year in America. New Year’s Eve is first, with Christmas and July 4th coming second and third.

For many people St. Patrick’s Day is a national party with an emphasis on excessive drinking, but to others, it is an opportunity to celebrate a man who was devoted to God and returned to a land that held him captive for 6 years to serve others and share the gospel.

This year on March 17th I’ll raise a glass of beer and toast the life of St. Patrick and his mission of sharing the gospel, or good news of Jesus.

May the winds of fortune sail you,
May you sail a gentle sea.
May it always be the other guy
who says, ‘this drink’s on me.’

May your days be many, and your troubles be few.
May all God’s blessings descend upon you.
May peace be within you, may your heart be strong.
May you find what you’re seeking, wherever you roam.